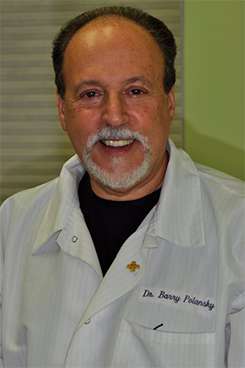 Dr. Polansky has delivered comprehensive cosmetic dentistry, restorative dentistry, and implant dentistry for more than 35 years. He was born in the Bronx, New York in January 1948. The doctor graduated from Queens College in 1969 and received his DMD degree in 1973 from the University of Pennsylvania School of Dental Medicine.

The doctor’s postgraduate study includes completion of the continuum of courses at the Pankey Institute for Continuing Dental Education (where he’s a visiting faculty member), the Dawson Academy, and Dr. Michael Schuster's program in Scottsdale, Arizona. He has completed two years of continuing education in implants, including placement and restoring, at Implant Seminars in Miami, Florida. Dr. Polansky is a lifelong student who has taken courses taught by some of dentistry's top teachers, including Dr. Frank Spear, Dr. John Kois, and Dr. Dick Barnes.

Dr. Polansky wrote his first article for Dental Economics in 1995 – it was the cover article. Since that time Dr. Polansky has earned a reputation as one of dentistry's best authors and dental philosophers. He has written for many industry publications, including Dental Economics, Dentistry Today, Dental Practice and Finance, and Independent Dentistry (a UK publication). His articles are regularly featured in The Pankeygram, the official newsletter of the Pankey Institute.

In 1999, Dr. Polansky developed his own newsletter, Academy of Dental Leadership , which has become a leading guide for dentists who seek a philosophical approach to running their practices. The newsletter led to the completion of his first book, The Art of the Examination, which was published by ADL Publications in March, 2002 and is required reading for dentists attending classes at the Dawson Academy and the Pankey Institute.

Dr. Polansky is a highly sought-after author whose future projects include the creation of a series of workbooks to accompany The Art of the Examination. These workbooks, called “The Dentist's Roadmap to Success,” will help dentists adopt Dr. Polansky's unique methods into their own practices. He is also writing a second book that will apply many of the principles he has learned in dentistry to other businesses and to life in general.

Dr. Polansky’s speaking career began in 1994 when he taught a one-year management course. In 1995, he taught this course to junior dental students at the University of Pennsylvania School of Dental Medicine. Dr. Polansky offers a seminar on The Art of the Examination and has presented his program to the Pankey Study Club of St. Louis.

Additional speaking engagements include the Jersey Shore-Seattle Study Club, the Cape May County Dental Society, the Rotsaert Dental Laboratory in Hamilton, Ontario, and the Growth to Greatness Institute in Medford, Oregon. Dr. Polansky produced and hosted the Paddi Lund Seminar in 2002 at the Loews South Beach in Miami, Florida. He continues to speak at many dental venues, including the ADA annual meeting.

A Portrait of the Man

Dr. Polansky, a modern Renaissance man, enjoys diverse hobbies. Following the philosophy of dental visionary L.D. Pankey, Dr. Polansky possesses a passion for many interests outside of dentistry in order to live a balanced life.

He is a voracious reader who completes at least two books each week. His book reviews are one of the most popular columns in his newsletter. Dr. Polansky is devoted to his health and spends more than ten hours each week in the gym. He loves 1950's doo-wop music and computers. After his family, Dr. Polansky’s greatest joy in life is his dogs. Dr. Polansky and his wife breed, raise, and show champion Boxers. Dr. Polansky even built a kennel for his growing canine family. Lately, he has begun to perform the role of handler for his own Boxers at dog shows, and he’s determined to bring home a championship.